Given the dramatic changes a woman’s body endures throughout her pregnancy, and the potential trauma inflicted by either cesarean or vaginal birth, a woman could greatly benefit from the additional support provided by a postpartum support garment.

After labor and delivery, a woman faces tremendous transitions with her postpartum body. A proper support garment can be of great assistance.

If a woman has experienced a Cesarean delivery, the body area affected most by the procedure is the abdomen. The Cesarean incision, typically located horizontally between the hips, is stitched and requires time to heal. furthermore, because a birth by Cesarean section typically mitigates the need for pushing by the mother, the location of her internal organs and general body structure, for the most part, are unaltered from their pregnancy state. once a woman metabolizes the anesthesia from her system, she will be asked to begin moving around. The transition from lying in a hospital bed to walking can be incredibly painful for a woman who has undergone a Cesarean birth. Not only will the incision area be painful, but the sensation of shifting organs may be uncomfortable.

Of great concern to many women is the scarring that can occur after a Cesarean birth. To lessen the possibility of a noticeable Cesarean incision scar, a form of pressure therapy can be applied. Skin is made up of 2 layers, one directly below the other, called the dermis and the epidermis. When the epidermis (outer layer of skin) is damaged, the dermis produces skin cells that can result in raised scar tissue. pressure therapy can prevent the overproduction of skin cells, reducing the possibility of unattractive raised scarring.

A woman usually might receive an abdominal binder from the hospital immediately after a Cesarean birth. The binder is typically worn during the time that a new mother is recuperating in the hospital. A well made binder can provide adjustable support and protect the cesarean incision during the first few days of recovery. However, once the immediate postpartum swelling begins to subside, a postpartum body support garment can provide constant and consistent 360 degree pressure to assist in keeping the incision stable.

Women leaving the hospital after a Cesarean birth are encouraged to avoid lifting anything over 10 pounds and limit activity to reduce unnecessary trauma to the incision site. Muscle tissue underneath the incision, which was separated to allow for the baby’s birth, will take several weeks to mend. While an abdominal binder is a good choice for a woman during her hospital stay, a body garment provides superior support and stabilization. A body garment protects the incision area, keeps the abdomen flat on either side of the incision to reduce the severity of scarring, and provides light compression to mitigate fluid accumulation.

A postpartum body garment that specifically addresses the needs of a woman who   has undergone a Cesarean birth offers support to the entire torso, abdominal wall, and assists in incision healing. Furthermore, a body garment stabilizes the pelvic floor and supports the spine, giving a woman greater body stability and confidence that she can care for her child as she transitions back to her daily life. 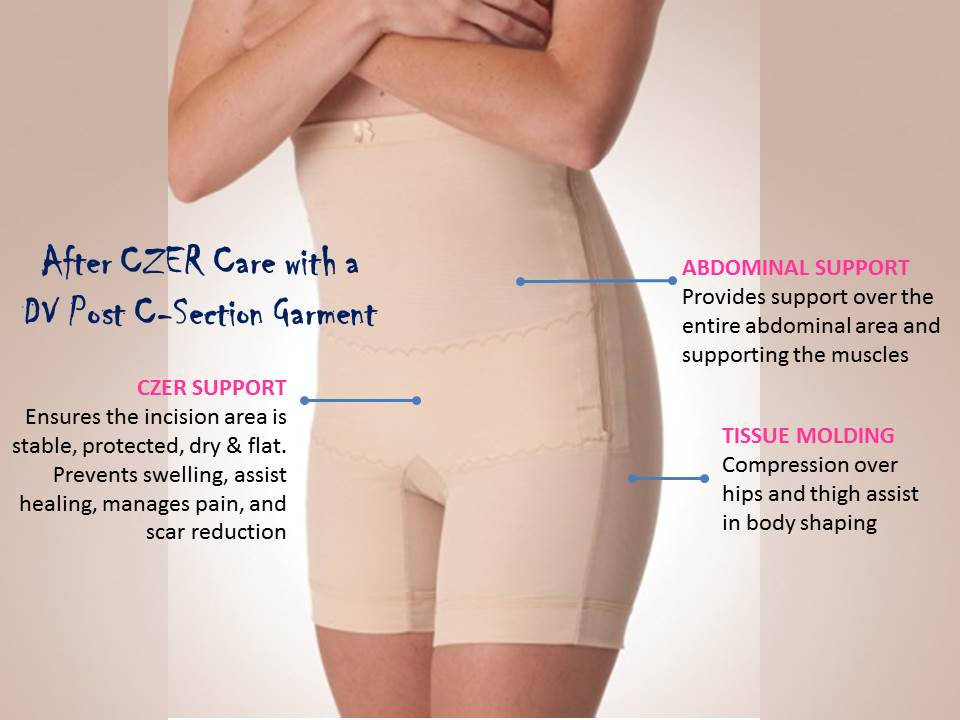